Enhancing Online Safety for Women Working in the Media

GEN VIC and The Media Entertainment and Arts Alliance have partnered to launch Australia’s first effort aimed at addressing online abuse of women journalists, in a report identifying the responsibility of media organisations to support the online safety of both in-house and freelance journalists.

The ‘Don’t Read the Comments: Enhancing Online Safety for Women Working in the Media’ report recommends that media organisations should begin treating gender-based abuse against women journalists on social media and websites as an issue of health and safety and take more responsibility for ensuring that women journalists are supported in the aftermath.

A vast majority of journalists had experienced online harassment, trolling and stalking during the course of their work, but only 16% said they were aware of their workplace having existing policies to address online abuse. We are calling for a united industry approach by media organisations to combat the prevalence of online harassment and abuse of women media workers

The recommendations contained in ‘Don’t Read the Comments’ are:

The full report is available here. 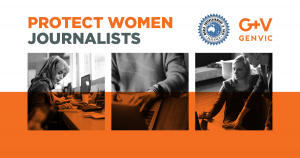 If you’re being harassed or threatened by someone online, you are not alone. In cases of serious harassment we suggest you contact: