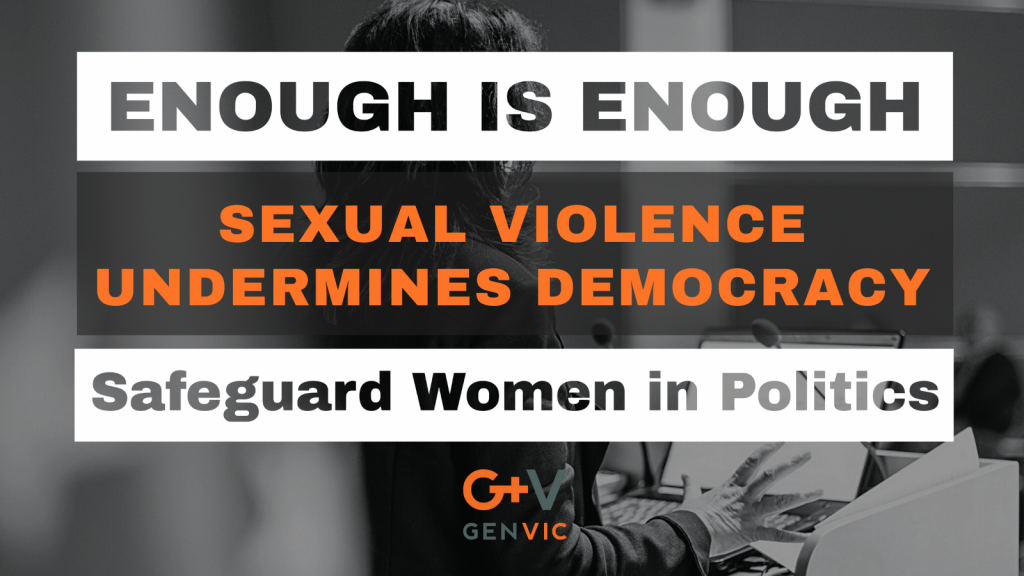 GEN VIC is calling on State and Federal Governments to jointly fund three initiatives to protect women parliamentarians and staffers. However, GEN VIC is also calling for the community’s support seeking donations to a crowd-funding Campaign: #EnoughisEnough: Safeguarding Women in Politics.

“We can’t just rely on politicians alone to regulate themselves and make parliaments safe. We need ordinary citizens to help us make Safeguarding Women in Parliament a reality by funding prevention and safety projects directly, which is why we have opened a crowdfunding campaign for all people who want to contribute to creating safe and equal Australian Parliaments” said Tanja Kovac, CEO Gender Equity Victoria

1 – An independent review of politicians and staffers exploring experiences of sexual harassment and gender-based violence in Parliaments.

Building on the Sexism, harassment and violence against women in parliaments in Europe report by the Inter-Parliamentary Union Bureau of Women Parliamentarians, GEN VIC supports calls for the Sex Discrimination Commissioner to be resourced to conduct anonymous interviews with members of parliament and staffers to assess the prevalence of gendered violence within Australian Parliaments.

“It is imperative that governments invest in an independent body to assess the state of gendered violence and gender inequality within parliament. I know that this work cannot be done within political parties. It doesn’t work and the issue of violence and abuse of women MP’s and women staffers will continue to be swept under the carpet,” said Kovac

2 – Immediate Gender Equality Audits of all Parliaments across Australia

Parliaments must be designed to be safe spaces for all people. To ensure this, an audit of the rules, operations, spatial and geographic safety and inclusivity of all Parliaments should take place as a matter of urgency. Gender audits are essential to creating parliaments free from sexism, bullying and harassment and encouraging greater gender equality.

“It is vital that Parliamentary practices, procedures and spaces are audited to assess their fitness to enable the full, safe and equal participation of women. If parliaments continue to ignore the ways in which they entrench gender inequality by their own conduct and rules, we will continue to see cultural problems leading to sexual and gendered violence against women political leaders and up and coming women staffers with political ambition” said Kovac

3 – Support to enhance the online safety for women in politics

Women leaders online are at higher risk of exposure to gendered cyberhate than male leaders. GEN VIC has developed industry strategies for the media to improve protections for women journalists. We now need to extend this work to ensure parliaments and political parties are equipped to support women politicians and their staffers in managed gendered cyberhate. This project will draw from GEN VIC’s successful resource Don’t Read the Comments: Enhancing Online Safety for Women Working in Media (2019), a world-leading report on the actions media organisations must take to create safe online spaces for women journalists, who likewise face elevated levels of online abuse.

“ The tirade of online abuse experienced by women politicians is more frequent and more gendered than that towards male leaders. If women fear for their safety in politics, it stops them running for election” said Ms Kovac.