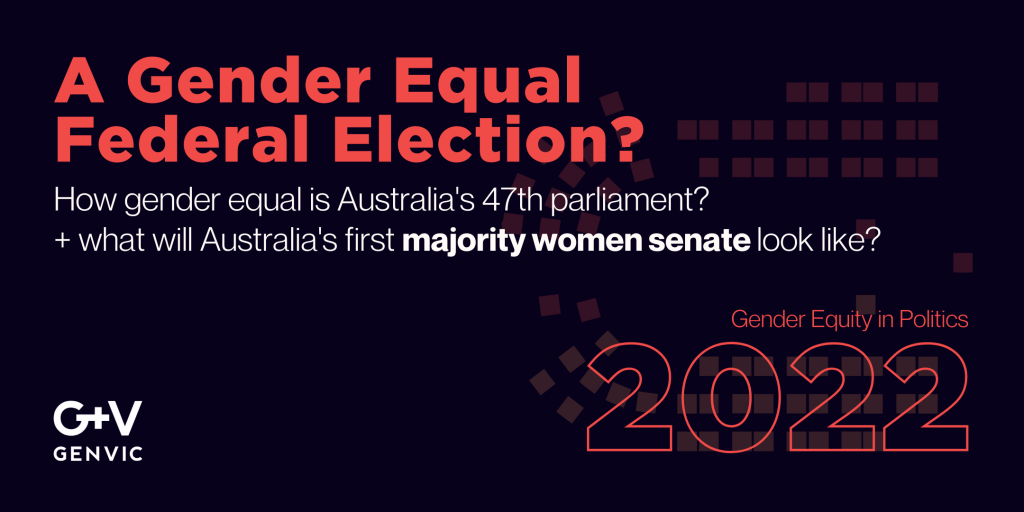 This is a historic election for gender equality. For the first time ever, Australia is likely to have a senate of majority women – with women making up an incredible 56% of the senate. Meanwhile, the house of representatives still sits at 38% women, up 7% from the last election.

Allegations of sexual assault in parliament, increased awareness of the unsafety of parliament for women, and COVID-19s magnification of the dependence our social systems have on many underpaid women workers have galvanised generations of women to vote for change. Similarly, political lowest-common-demoninator attacks on trans women failed to divide the gender equality movement, with national gender equality organisations condemning these attacks and calling for justice and safety for all women.

From our special advisers

Our special adviser, Julia Banks (Federal Member 2016 – 2019) says that the outcome of this election sends a clear message: “The Morrison Government didn’t listen to the collective voice regarding safety respect and equity for women particularly in 2021 & during the March for Justice, but Australians made their voice loud and clear in this at the election.”

Similarly, GEN VIC special adviser Trish Crossin (Federal Senator 1998 – 2013) stated that “The March for Justice was part of a tidal wave of action by Australian women. Lack of respect, discrimination, inequality and disregard for change sparked a wave of anger that ended at the ballot box. Women have spoken, through their actions-powerful votes that have changed the political landscape. Quietly, yet effctively, ensuring they will no longer be ignored “.

We’re proud of the role GEN VIC played in the Enough is Enough campaign to highlight the need for safe and equal parliaments.

From Julia Banks, “It’s important that all the Respect@Work recommendations are implemented particularly the ‘positive duty on the employer’ to eradicate sexual harassment. – and the scope could be broadened to include all workplaces including our parliaments, the private and public sector. That will mean significant law reform as well as the other proposals which will mean greater safety respect and equity for women“.

Similarly, from Trish Crossin, “The Albanese government needs to make a priority its guarantee that both reports, Respect at Work and Set the Standard are fully implemented. Women are angry and are waiting for leadership to ensure their workplace is safe and they will be treated equally-and that starts in the national parliament.” 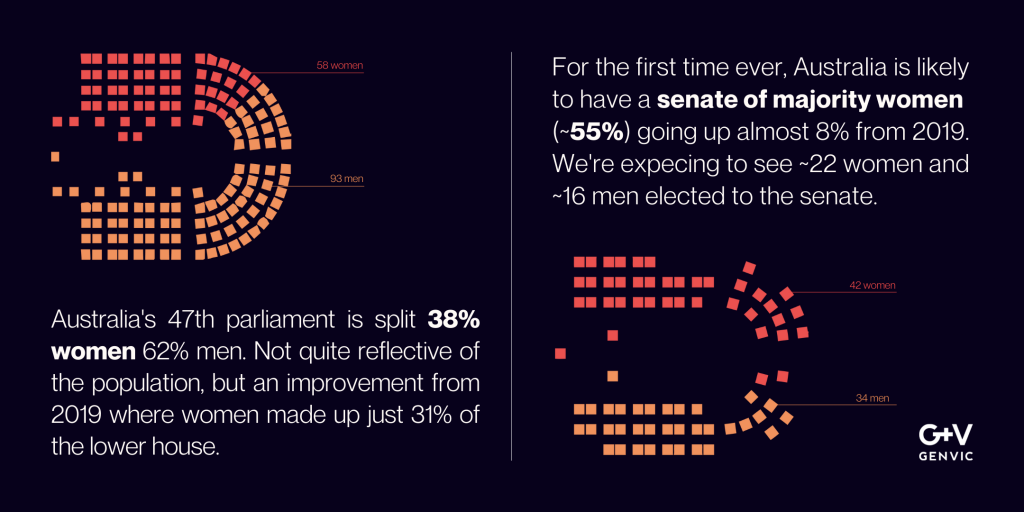 Women voters have largely been credited with the changing the government. We saw a swing towards women independents this election with 9/10 of winning independents being women. Similarly, in Western Australia where the most seats changed hands, we saw a huge boost to gender equality in the parliament – with WA now breaking 50/50, with women making up 53% of the state’s federal members. Here’s the numbers for the house and the senate as at 8/06/2022, according to the ABCs predictions.

The House of Representatives

How many women are in the house of representatives? How does this compare to the 2019 – 2022 parliament? How many federal seats in each state are occupied by women? What party has the most women in the parliament? The many answers below.