Put Her Name On It 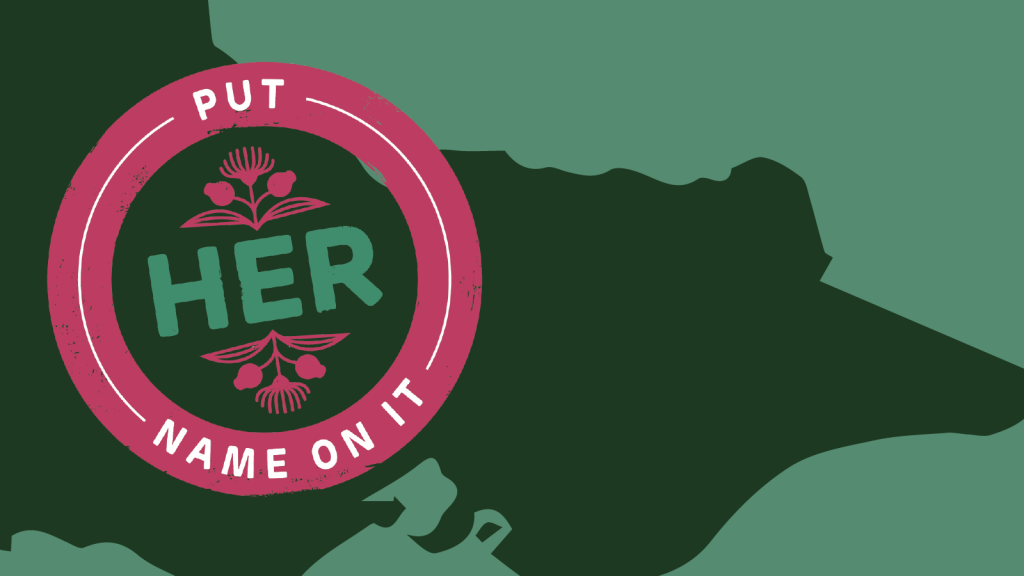 How many places in Victoria are named after women? It’s hard to know the exact number. What we do know is that compared to men, there’s not many places, artworks or monuments that commemorate women.

Put Her Name on It is designed to challenge and change Victorian public spaces to be more gender equal through collaborative action. GEN VIC and Geographic Names Victoria are working together to develop resources, strategies and communications to increase the public commemoration of women in Victoria.

Victoria has a rich history of incredible women who have shaped this state. Despite this, our public landmarks lack a gender lens. There are too few women recognised and honoured in street names, parks and gardens, state electorates, local government wards and via significant sculptural and other public artworks.

Put Her Name On It isn’t just about increasing the representation of women in public place naming, it’s also about shining a light on the places, artworks and monuments that currently recognise the achievements and histories of women in Victoria.

Thanks to our PHNOI advocacy, we have seen an uplift in interest and investment in memorialising Victorian women, with $1M of funding for six new memorials to Victorian women (including equal pay activist Zelda D’Aprano and disability rights champion Stella Young).

We are thankful to Women in Gippsland for their initiative in establishing the Put Her Name On It project and Campaign. We are proud to be able to give this important campaign a new home at GEN VIC, supporting the work of so many Victorian women. Leading this project is Kerry Irwin. If you know a Victorian woman whose story should be recognised in our public places, you can contact Kerry at puthernameonit@genvic.org.au.

What is Commemorative Justice?

Commemorative justice isn’t just about equality, it’s about justice. It’s a way of correcting the record. For many marginalised people, their histories and achievements have been deliberately submerged in order to uphold an unjust status quo. Comemmorative Justice is about changing this and telling the true story of our public places, who shaped them, and who continues to shape them.

For many women in Victoria, the only place they see themselves in public spaces is in advertising designed to drive consumption, while seeing mostly men’s faces and names commemorated by the public and community as agents of historical change. Changing public places, to recognise the true histories and stories of women in this state is about changing the story of our public.

As CEO of GEN VIC Tanja Kovac has said “If we cannot see women and gender diverse people represented and remembered in our public places and street names, as well as public art and sculpture, we send the wrong message, especially to young people, that only men’s achievements are worth celebrating.”

The Put Her Name On It project recognises that within the feminist and gender equality movement there has been historic erasure of the stories and achievements of First Nations people. A strong commemorative justice movement must acknowledge and recognise the stories of First Nations women, whose stories and achievements have long been erased from the history of Victoria. Our gender equal future depends on addressing the falsehoods of our past.

GEN VIC and Geographic Names Victoria Local Government Survey: We’re finding out just how many places in Victoria are named after women through a state-wide survey of Victoria’s approximately 250,000 place and road names. Whist we know there is a gender gap in commemorative place-naming, the extent is yet to be defined.  We’re working to bridge the data gap through ground-breaking state-wide research to understand how well women are represented in public spaces. The research is targeted at Local Government due to the significant role they play in the naming of places, public art installations and approvals. Read more.