Victorian Budget is a good start towards a gender equal recovery

Gender Equity Victoria welcomes the Victorian Government’s 2020/2021 state budget after several months of delay due to the coronavirus pandemic, during which women emerged as the major health and economic victims of COVID19.

The State Budget confirms that women were the hardest hit by the pandemic with employment falling by 6.7% for women (109,000 jobs) compared to 3.9% for men (70,000 Jobs). This is because the vast majority of employment losses were in part time and casual work, according to Treasury.

“The State Budget confirms the pandemic in Victoria caused a she-cession, with an unequal economic impact on men and women. The budget initiatives announced today are a good start on a long road to a gender equal economic recovery.” said Tanja Kovac, CEO of Gender Equity Victoria.

In addition to boosts to kindergarten and before and after-school care programs helping women return to work, GENVIC welcomes the following economic recovery initiatives announced today:

“It’s going to take more than one budget cycle to correct the impact of COVID19 on women’s economic insecurity. There are promising signs that women are being prioritised at a State level, but the pandemic has exacerbated entrenched issues that will need devoted resources over several budgets” said Ms Kovac

“That’s why the $37.8M in gender equality initiatives announced in this budget are so important. $11.2M to support the Gender Equality Act, $16.9M for Gender Equality Programs and $9.7M for family violence prevention and early intervention for migrant and refugee communities means the State can lift expertise it needs to solve intractable problems for women such as pay inequity, lack of secure, part time work, the impact of unpaid care load at home and gendered violence,” said Ms Kovac

“Government has a role in shaping a caring economy that benefits men, women and gender diverse people equally.”

“Though we can see an improvement in the gendered economic analysis in the Budget’s Strategy and Outlook, we are disappointed to see that’s the Gender Equality Budget Group has been overlooked by Treasury for investment. “$1.05M was a small price to pay for delivering economic innovations from gender economic experts across Australia. We will continue to advocate for improvements in gendered economic reporting and strategies to address women’s economic insecurity,” said Ms Kovac.

GEN VIC looks forward to working with the Victorian government for the 2021/22 budget to be released in May next year. We hope to continue to work towards a gender equal recovery for Victorian women and gender diverse people.

A Gender Equity score card measuring performance against the asks of gender equity organisations across the State of Victoria is attached. 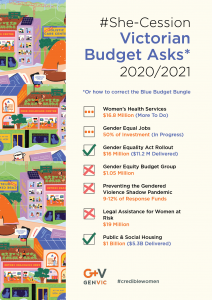 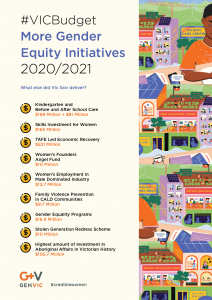